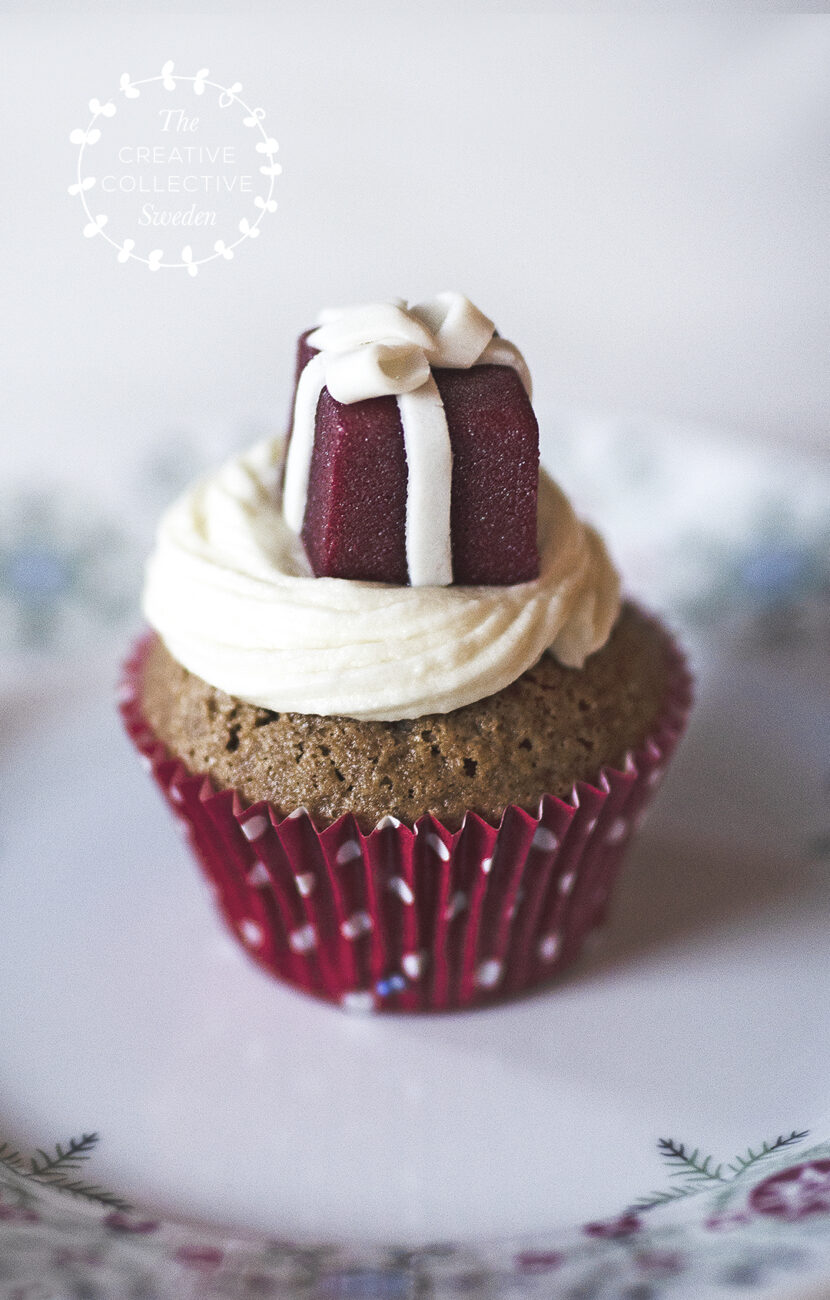 Wishing you all a very merry Christmas Eve today, I am so happy to meet you here to bring DAY 24.

In Sweden, Christmas Eve is the day of the biggest “Jul” celebrations and cozy gatherings. My friend, Jennifer, is a fellow ex-pat and novelist whose friendship and creativity means so very much to me  — embracing the good from many places. Jenn is also the most amazing entertainer (whose  “20 years in Sweden party”  this year possibly tops her originality list.) All of these elements led me to ask Jenn to share something very simple but full of accessible merry making on this day that bridges cultures: her cupcakes.

I’ll pass you over to Jenn to share her post for this special day with you. Thank you, Jenn.

Mia Lewis, the fictional, hard-charging Wall Street executive in my novel Lagging Indicators, has a soft spot for cupcakes.  They are her guilty pleasure and she loves to gorge on a box of dainty delicacies from Magnolia Bakery in New York.  She even finds a rustic cupcake café to eat her sorrows away after fleeing the city in professional disgrace. This little character detail, Mia’s love for these sweet, whimsical creations, was inspired by my own obsession with cupcakes.  They’re a study in contradictions; miniature but over-the-top, decadent but designed for portion control.  Cupcakes were also the festive treat my mom baked by the dozens for my birthday.  I waited all year for the chance to bring them to school and hand out to my classmates at snack time.  With every bite, I knew so much love was packed into a single cupcake.

I was disappointed to discover there was no such birthday cupcake tradition in Sweden when my own children were small. However, I shouldn’t have been surprised; cupcakes evolved in the United States during the 19th Century.  They coincided with the shift from weighing out ingredients when baking to measuring out ingredients.  Cupcakes were originally cooked in small pottery cups and their “invention” saved significant baking time in the oven.  When muffin tins became popular in the 20thCentury, people began preparing cupcakes in these individual molds, adding to the convenience.

Cupcakes have become nothing short of a cult phenomenon and they invaded Sweden in the last decade.  Swedes call them muffins, which I find rather confusing, but I’m nevertheless thrilled that I’m able to find the baking paper, pans, and toppings needed to bring these masterpieces to life.

I love making cupcakes for the holidays.  My specialty is pepparkaka, or gingerbread cupcakes, and I embellish them with a variety of Christmas-y flavors and decorations.  My recipe is semi-homemade since I rely on the Kungsörnen Pepparkaka cake mix.  I’ve made gingerbread cake from scratch in the past and can honestly say that it didn’t taste any better, so I put all my focus on the icing and garnish.  I use a base recipe for buttercream frosting from Domino’s Confectioner’s Sugar and convert the measurements, working with the Florsocker found in Sweden.  My favorite holiday glazes are vanilla, cream cheese, and peppermint.  In addition to the standard red and green sprinkles, my toppings reflect a Yuletide motif: candy-cane shavings; pepparkaka cookie crumble; Hershey’s Kisses; Christmas M&Ms; mini-marshmallows; powdered cardamom; marzipan figures; metallic and winter-themed trimmings… Deep hues of red velvet, holly green, and hot chocolate transform a humble cake into a sparkling gem.  Small in stature, but big on imagination, holiday cupcakes embody the joy and merriment of the season!

I am excited to be one of the 30 founding contribu