Hola! Miami and Stockholm normally have very little in common. This weekend, however, the common thread between these cities, was us.  I still can’t believe we pulled off this weekend get away! (Thank you, St. M!)  It was so much fun. I returned yesterday from a romantic, beach strolling, crab cake sampling, 44 hour tour of Miami where I met my husband, Staffan, who was there on business. It was just a small sampling of this city but, it was a place with a beat and yet, an ease from beginning to end. 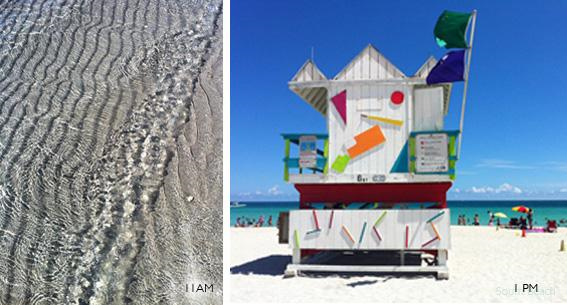 Friday night. 10 PM: Coconut Grove.  Under the warm night air, covered by Hammock and palm trees and to the beat of the music in the air, we walked around the neighborhood and headed to a local restaurant known for it’s ceviche, Jaguar. From our first dip of guacamole, we were enchanted with the sublime flavor imparted by the local avocados and continued on this course, the whole weekend, enjoying everything regional.

Saturday: Breakfast in the neighborhood. Cafes were open as early as 5 and there were an impressive number of runners, bikers and yoga devotees in the morning along with families, singles and couples. After that, we headed by Vizcaya and easily meander the rest of the day away in the Art Deco district  and South Beach area.  The temperature, the pulse, the colors, the vegetation made us feel we were living in a place so far away from where we ordinarily call home. 7 PM. Reservations at Red Fish Grill* for a ocean sunset dinner and a beautiful drive for fresh fish on the beach front in a beautiful park called Matheson Hammock Park.

Sunday: Early coffee at local cafe. 8AM Key Biscayne trip to the see the lighthouse in the Bill Baggs State Park and enjoyed the beach. Looking south, down the beach, it felt pure Caribbean and to the north, a city scape. We met a giant lizard on our walk in and crossed paths with crabs but, hear that it is easy to meet a manatee or dolphin off-shore, with a bit of luck. Noon: Lunch in Coconut Grove. 3:30 Boarding. Return to Sweden for me.

We were told by locals that “Miami is the biggest city in Latin America” and it was easy to understand this generalization. At the same time, the vibe was southern and laid back. Miami was as I expected and then, again, not. Today, I will just say: thank you, Miami, for a fantastic weekend!

* Do you remember the scene in the movie, Something about Mary, where Matt Damon’s character is spying on Cameron Diaz’s character in a restaurant? It’s this restaurant! The thought of this comedy couldn’t take any of the splendor of our night away. The location is so pretty.