Happy Friday! These 3 foot thick walls couldn’t keep the wcold out today — brrrr — but, it was worth the effort it took to hold our heat. I was here to begin working on a new collaboration that I’m really excited about. Walking the passages of Ulriksdal’s Confidencen Theater felt like passing through time! 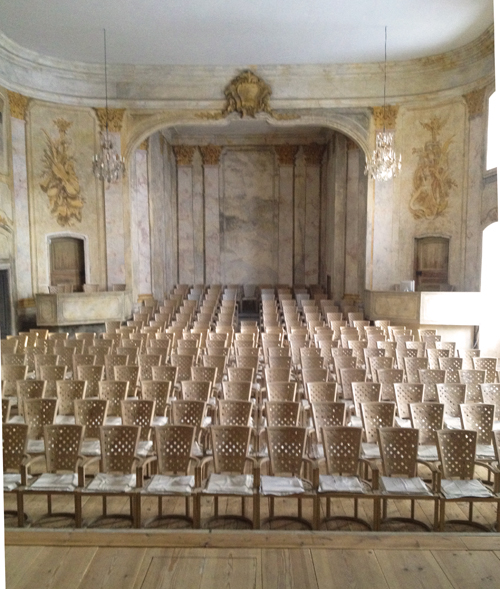 After taking in the scale of the room, the stage and set; and the intricately marble painted facades, common to northern Europe; we moved on to door after door of flashy, fancy costumes; subtle, Gustavian pastels; lions, tigers and bears…; flower garlands, drawers of crowns and tales I’d never heard before. One was of a former Swedish Queen who had lived
on these grounds, centuries ago. Not only had she left her country (Germany), family and friends behind to become Queen of this quiet, far-a-way- northern country; but, apparently, left behind real ballet, too. She was so scandalized by the level of the ballet she saw at her first performance, that she fired all 5 people in charge that day. Ballet survived.
Admiring the windows above, I thought of the figurative windows (or doors) that one has to sometimes close before opening a new one; and the bravery this can take — small or big. This idea has come up repeatedly, in conversations, all week. Bravery doesn’t have to be as bold as moving in a horse and carriage to a new country in a time before airplanes and internet. Bravery can be as small. It can be braving the cold to take your kids ice skating. I wish you all of the big and small bravery you need this weekend and in the year ahead.
Brave the cold and go ice skating…
Brave a new recipe,
Brave wearing a new color,
Brave listening,
Brave saying “no,”
Brave saying “yes,”
Brave trying something new,
Brave finishing what you’ve started,
Brave starting,
Brave ending something you know isn’t working anymore,
Brave supporting someone you love,
Brave asking for help,
Bravely be the person you want to be.
See you back here next week!
Something for the weekend:
ice art series,
snow flake lions
Valentine’s preparations
ice skating (here, here) and here)
winter picnics,
indoor smores