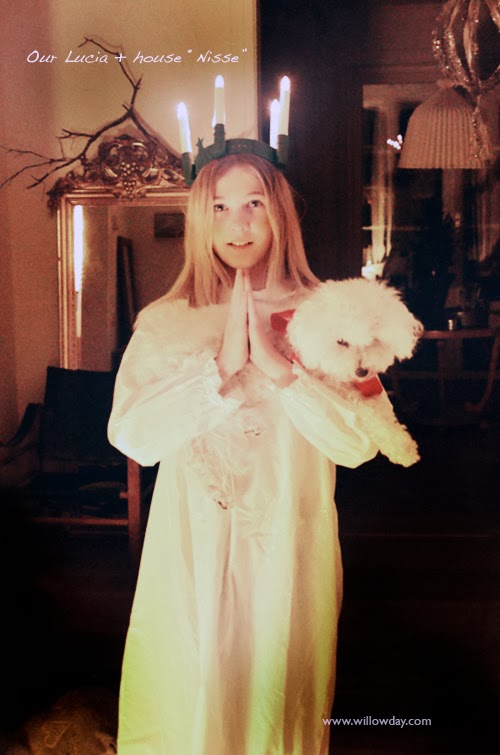 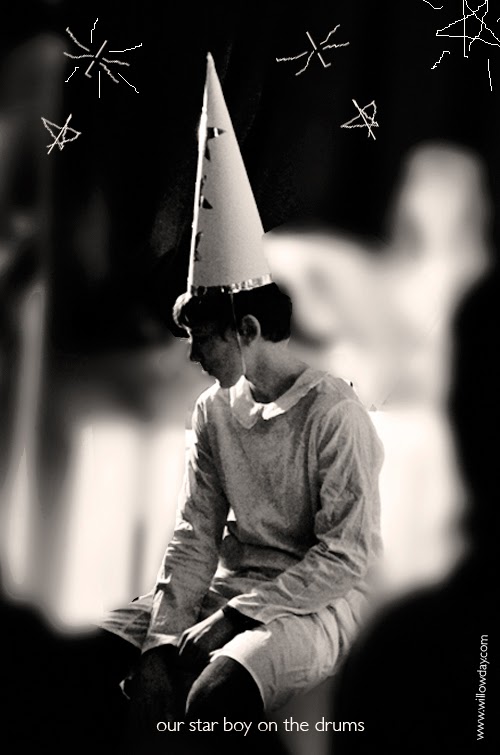 Happy Lucia. To us, Lucia means white gowns, stars and candles. This year, we arrived early to school and then, waited outside, expectantly, with one hand clutching our mobile phones for recording and Luciekatter (Saffron buns) balanced with warm coffee to keep the chill off for the class Lucia Procession, in the other. This year, our oldest son’s 6th grade class was responsible for the school’s Lucia concert which I believe was performed at least 6 times (inside and out) for parents and for the entire school. I caught 4 of these concerts and think I matched this number with Luciebullar, too. Although this is not a tradition from my childhood, I joined several other mothers with a tear in my eye. The over all effect of the concert is just so beautiful and touching! 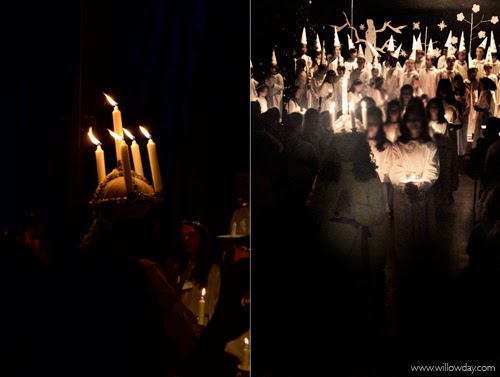 After enjoying the traditional 6th Grade Class Chorus who had, correctly, just one stunning Lucia whose crown was lit with real candles —- accompanied by her maidens, all bearing one candle and star boys with white gowns and star hats —- I visited the pre-school to see the classes teaming with multitudes of Lucia, Gingerbread boys, Elves and a lone Star Boy — modernity!

something very social about this special day. After school, we met friends at a bakery and came home for more! Henry’s game for whatever we have going on; including getting wrapped up in ribbon. His birth name was Nisse which is the word for elf in Swedish. We’ve kept it as a middle name and he seems ready to live up to his role this season. 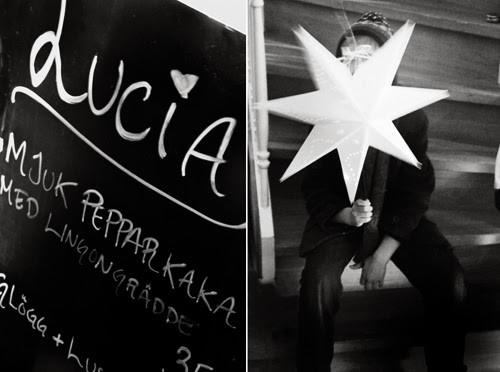 On this day, tradition goes that the children wake up their parents by dressing up in their costumes to surprise them in bed with coffee, ‘lussekatter’ and gingerbread on a tray.Schools, companies, hospitals, well almost everywhere celebration, including many towns voting on their own Lucia! This week also brings the Nobel Banquet to Stockholm and with it, there’s a story of a past winner and the tradition to surprise the Nobel Prize winners early in the morning when they are still in bed at their hotel, with a singing Lucia procession. Apparently, one year, a winner became startled and peeved at this unexpected surprise and since then the winners are now always given advance notice. With the sun not reaching the horizon until 9:15 AM, it’s understandable that the hour feels very early!

In answer to the question that I’m asked a lot: How did St. Lucia come to be in Sweden? It’s really never discussed but, after research, I’ve learned that no one knows exactly why this holiday came to be or came to Sweden from Italy; except that up until the year 1700, Dec 12 or 13th was considered to be the longest day of the year. Coincidentally, St. Lucia passed away on December 13 — and her shining, angelic, figure became the image of the day in Sweden. Dec 13 was once considered to be the shortest day of the year and hence the date chosen for the day which welcomes light. In the 700’s, people believed that ghosts and spirits that would came to life on this day and that animals could, too. It became a game to dress up in costume to scare the spirits away in the morning — including men in wedding dresses. — and the last person to get up was called ‘lussegubben’. Since the night was long and people would get up so early, big breakfasts were eaten, which included the tradition of Lussekatter (Saffron buns called Lucie Cats) It was popular to dress up in scary and funny costumes, and the funniest of them all was when the males dressed up like brides. Around 750, these customs spread from farms to the cities and to universities where students would dress up in dresses and bring their professors coffee and Luciekatter while singing to them. The first public Lucia-procession was arranged by a Swedish newspaper, Stockholms Dagblad, in 1927. After this, modern Lucia celebrations started spreading rapidly around the country.

If you don’t have small children with school concerts or are a visitor to Sweden, I truly recommend the extra effort of rising early to experience a Lucia Concert. I will never forget the memory of my very first year , when we voyaged across town in the blanket of night, to see a church come alive with candlelight of the Lucia “Train” and hear the crescendo of song, from the choir, as they proceeded in to their places. Happy Lucia and Happy Weekend Wishes! 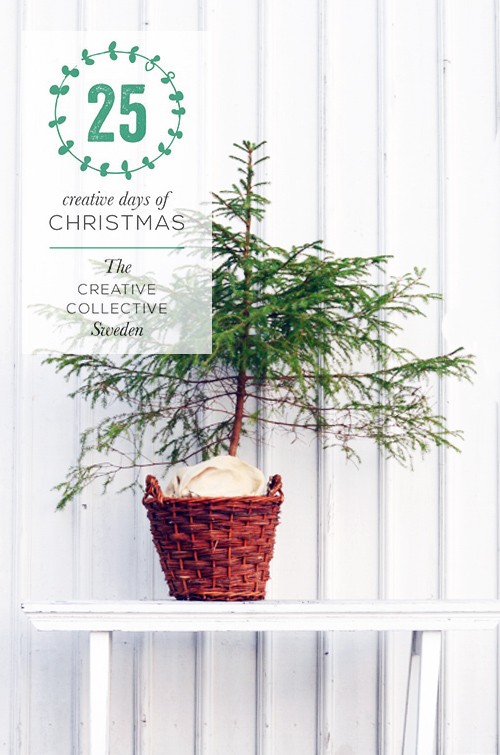 An object I cherish: this second hand flower press